This is the first step of a bigger project which is meant to feature the cars. This part consists of a 50s style Diner with a sign and a small gas station (rather part of it). And there is a new Rod, too, which is called Baby Blue.

There are some traces of different stuff in it which I tried to melt into something new. It’s not meant as a design study, but as a functional thing – something being used by minifigs. That means that if there is a barstool they must be able to sit on it – even if more beautiful barstools can be imagined. The diner has a detachable roof and a detachable back. The main points here are the slanted columns and the large windows.

Wurlitzer (own design)
“Pixar Cars” Bar with snotted napkin dispenser (own design)
Diner sign (own design, the V8 idea is taken from Pixar’s Flo’s V8 Café, but modified)
Gas pump (rather looks like something already known, but I couldn’t find an exact reference)
The fridge is taken from the Fire Brigade (slightly modified)

The Rod named Baby Blue is based on the Vintage Truck (see www.flickr.com/photos/er0l/8118521795), but turned out to something quite different. The main point here is the sun shield which is fixed with some upside down technique inwards. Using the red crowbar as an exhaust might be a new aspect, at least I haven’t seen it before.

That’s about it so far, thanks for looking! 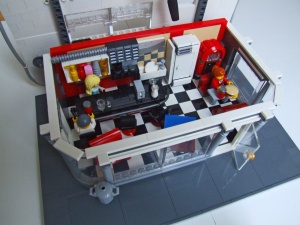 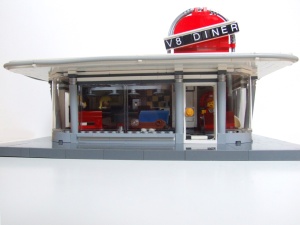 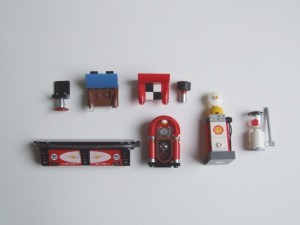